Broadway Market in Time Out

This week Time Out is running a guide to London’s best street markets.

They say that Broadway Market ‘is one of London’s most successful (and most gentrified) local markets with 80 stalls heaving with cheeses, meat and fish, cakes and preserves and a fruit and veg stall that’s traded on the market for the past 50 years.

Much smaller and less frenetic than Brick Lane, Broadway Market is also pleasingly eco-edged, with a ban on plastic bags and a stall selling souvenir cotton totes – perfect for the local trendies.’

Preliminary works have commenced on Crossrail and are continuing during 2009. Main construction will start in 2010.

Crossrail is the new high frequency, convenient and accessible railway for London and the South East. From 2017 Crossrail will travel from Maidenhead and Heathrow in the west to Shenfield and Abbey Wood in the east via new twin tunnels under central London. It will link Heathrow Airport, the West End, the City of London, Whitechapel and Canary Wharf.

Crossrail will make traveling in the region easier and quicker. It will reduce crowding on London’s transport network. It will operate with main line size trains, carrying more than 1500 passengers in each train during peak periods.

Crossrail will deliver substantial economic benefits in London, the South-East and across the UK. The estimated benefit of Crossrail to the UK economy is at least £36 billion (TfL figures, May 2006).

The new East London Line is scheduled for completion in May 2010 and will form part of the London Overground network.  Passengers will be able to use their Oyster Cards to access the network. Trains are expected to run every 3-5 minutes during peak hours.

The main structures of the bridges over Brick Lane, Shoreditch High Street and the Regent’s Canal are now in place, and well as the intervening viaduct and the approach viaduct which links up with the elevated Victorian brick viaduct.  The building of the stations all along the route is clearly in progress and is nearing completion.

The line runs through the heart of Hackney linking Whitechapel (Circle, District, Hammersmith, City and Crossrail), Brick Lane and Dalston Junction. The line will terminate at Highbury & Islington (completion 2011) where passengers will be able to interchange with the Victoria Line. 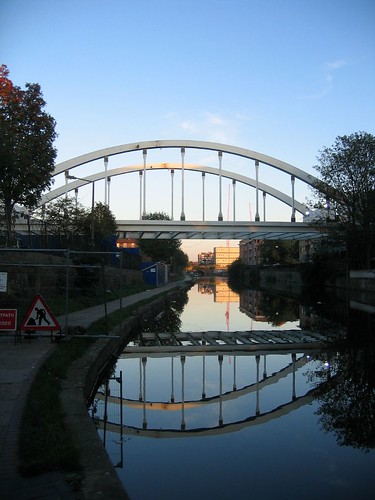 Falling prices for a wide range of goods from electricity to fruit, bread and cereals, pushed consumer prices downward in August from July, although by a smaller amount than most economists expected, providing more evidence of the resilience of UK inflation.

The Office for National Statistics said that Consumer Price Inflation rose by 1.6 per cent in the year through to August, below the 1.8 per cent rate in the 12 months through July and below the 2 per cent medium target set by the Bank of England’s Monetary Policy Committee.

The Monetary Policy Committee had cited its expectation that inflation would continue to fall in the months ahead when it agreed to increase its purchases of government gilts, known as Quantitative Easing, by £50bn at its meeting in August.

Indeed, Howard Archer, economist at IHS Global Insight, said: “Despite coming in higher than expected, the August inflation data do not fundamentally alter belief that the Bank of England will keep interest rates down at 0.50 per cent well into 2010. The bank could also still further extend its QE programme if bank lending fails to pick up appreciably. “

The FTSE 100 set an intraday high for 2009 on Monday as traders continued to bet that the prospects for a sustained global economic rebound were improving.

Elsewhere the world’s central bankers were in no hurry to start raising interest rates as they headed home on Sunday from the US Federal Reserve’s annual retreat in Jackson Hole, Wyoming.

France and Germany return to growth

An unexpected rebound in French and German growth helped push the eurozone to the brink of economic recovery in the second quarter, delivering a further signal that the worst of the global crisis may be coming to an end in Europe.

Gross domestic product in the 16-nation currency bloc fell 0.1 per cent in April, May and June, the European statistics office said on Thursday, cheering economists who had expected a decline of 0.5 per cent after a drop of 2.5 per cent in the first quarter of the year.

The UK housing market showed further signs of stabilising during June with a 23 per cent jump in the number of mortgages taken out by people buying a home, figures revealed today.

Around 45,000 mortgages were advanced for house purchase during the month, the fifth consecutive monthly increase and the highest level for a year, the Council of Mortgage Lenders said.

There was also a steep rise in the number of first-time buyers getting on to the property ladder, with 17,200 mortgages taken out by people buying their first home, 26 per cent more than during May.

The RICS survey showed a continuing rise in interest from potential buyers, with new inquiries increasing for the ninth month in a row during July.

The Bank of England’s rate-setters have decided to pump another £50bn of new money into the economy in their programme of quantitative easing.

It will take their total spending to £175bn, unexpectedly going over the £150bn set aside by the chancellor.

In a statement, they said that the UK recession “appears to have been deeper than previously thought”.

The rate-setters also decided to keep interest rates unchanged at their historic low of 0.5% for a sixth month.

Also on Thursday, the European Central Bank decided to keep its interest rates unchanged at 1%.

Buy-to-let is a viable option if done correctly

This is an excellent interview with a cunning buy to let investor, his main points being:

– Buy-to-let is a viable option if done correctly
– The ability to obtain finance is crucial
– You have to take a 10 year view on your investment, buy-to-let is not about flipping properties!
– Avoid illusionary discounted deals on new developments